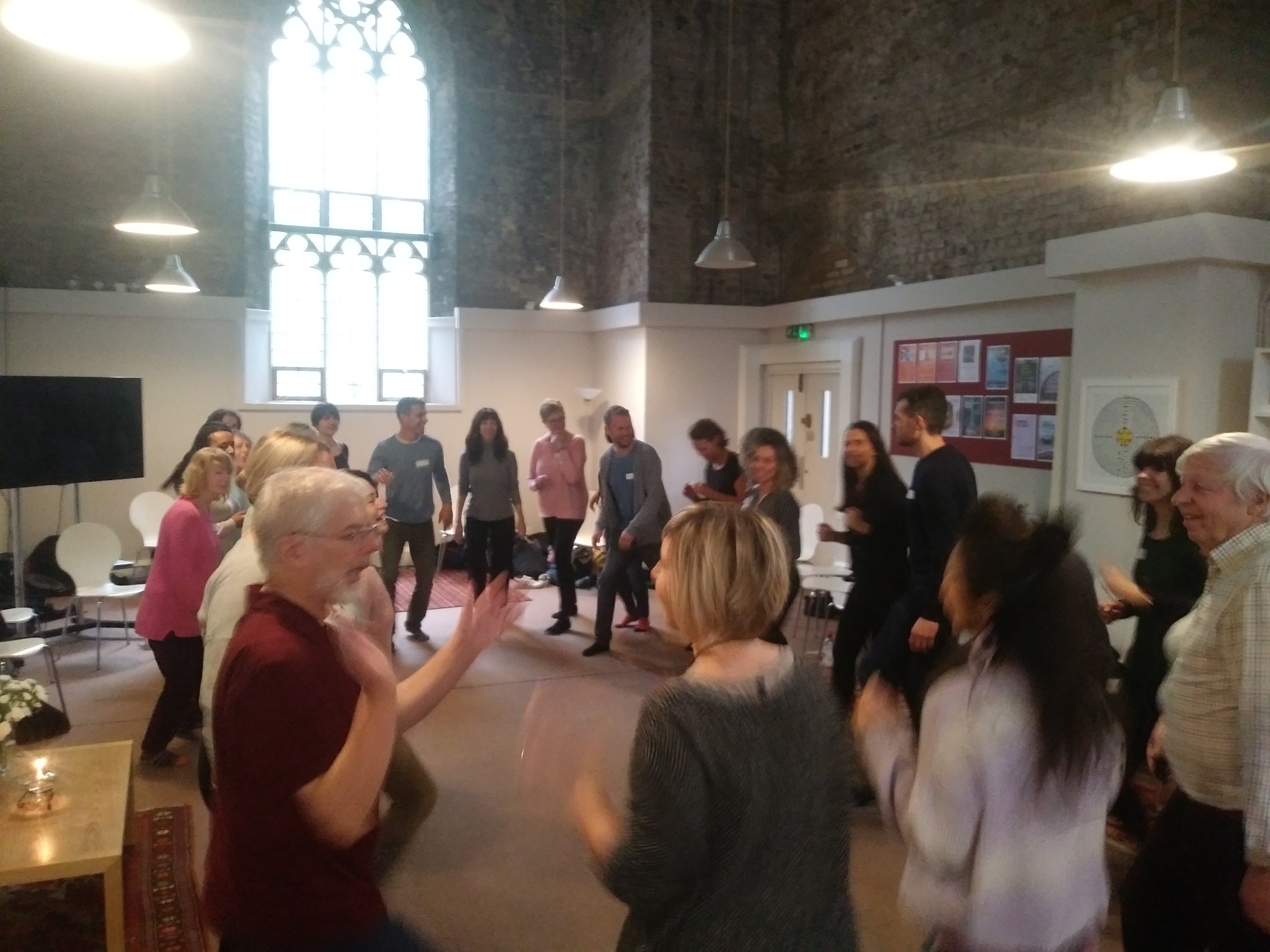 The Alef Trust workshop in London brought together about 30 students and faculty for a day of getting to know each other as we explored transpersonal practices.

Jessica Bockler and Les Lancaster opened the day with a warm welcome, inviting us into sensing the body, seeing spaces between people and moving as a group.  The invitation was expanded to locate ourselves within our culture, recognising and honouring the ongoing spiral of cyclical change in which intrinsically connects us to our ancestors and lineage.

We revisited the 8 themes from last year, bringing in new ones that were asking to be heard, and gathered into groups around these themes: (1) Connecting with spirit. (2) Generational change. (3) Be the change: inspired, empowered action. (4) Nature, collaboration, co-operation. (5) To be a bridge. (6) Imagination and people’s stories.

This third stage of the Appreciative Inquiry cycle, of “dreaming what might be” was approached through the lenses of different practices. Jevon Dängeli guided an Open Awareness exercise, an embodied approach to expanding our sense of self and shifting perspectives.  Les Lancaster introduced a powerful Kabbalah meditation combining breathwork with intention and visualisation. Paul Maiteny shared a recontextualisation of the individual human experience through an ecopsychology perspective within the wider ecosystem. After each practice, there was time to elaborate and integrate any new resonances and ideas while writing and sketching.

After lunch, Les and Jessica made an exciting announcement, that the Alef Trust has been awarded funding for a two-year Conscious Community Project. “The objective of the project is to deepen the global interconnectedness of our community and further empower students and alumni in our community to drive transformational initiatives, thereby cultivating the soil for social change in line with the values we foster,” they shared.

This led into the fourth cycle of “determining what should be” by focusing the morning’s insights into possible projects around each theme through creative group work led by Jessica, which included continuous drawing, sculptures of change and discussions.  The final integration of this work in process was shared through a presentation and the voicing of these heartfelt visions, which generated lively dialogues.

Lorraine Tolmie’s group explored the theme of Imagination and People’s Stories. “The embodied process that we were guided through was fascinating – it allowed us to look at the topic in an abstract/intuitive way and then gradually bring more focus to our ideas. Although the three of us in this group approached the topic from different angles we found our ideas linking as the process evolved.  I think we came to similar conclusions as many other groups – that the creation of sacred spaces, immersion in nature, and teaching children new ways of thinking are important aspects of consciousness-raising and making a better future.” A similar observation was made by Shannon Lowry, who later shared: “One thing that struck me as important and refreshing during our breakout groups was that despite us choosing different themes, staying connected to and protecting nature was consistent amongst the groups.”

As the day drew to a close, it was evident that the energy in the room had shifted since the morning. New connections had been made, inside, among and between us, and plenty of new information had emerged.  Samantha Glorioso reflected: “The workshop proved to be very insightful to me.  I found the exercises and activities engaging and stimulating, and fascinating how expressive the physical body can become when attuned to the mind and heart.  It was interesting to hear other people’s motivations and aspirations in regards to making an impact in today’s environment as well.”

Our online distance-learning MSc in Consciousness, Spirituality & Transpersonal Psychology provides you an intellectually-stimulating programme of study which focuses on diverse topics around the nature of consciousness, the dynamics between psyche and soma, the psychology of self and higher states of being, and the psychological basis of spiritual and mystical practices.

Our MSc programme is distinctive in valuing experiential approaches to learning and in encouraging our students to incorporate insights from the programme into their own life journeys. In addition to a rigorous academic curriculum, modules exploring integral life practice, transpersonal approaches to research, and a research dissertation focus on the practical application of learning.

The MSc programme consists of 180-course credits and most students complete the programme over three years, studying part-time. The programme is run entirely online, and it is validated by Liverpool John Moores University in the UK.